Craig Hamilton started his career as a broadcaster with ABC Radio in 1994.

Since then he has covered Rugby League, Rugby Union and Cricket at international level as a commentator.

Craig is probably best known as a member of the Grandstand Rugby League commentary and has worked Grand Finals, State of Origin series and a number of Test Matches.

Craig was born and raised in the Hunter Valley town of Singleton and spent 16 years working as an underground coalminer in the Newcastle area before embarking on a radio career fulltime in 1999.

In 1991 Craig represented the Newcastle and NSW Country cricket teams, and played against the touring Sri Lankan team.

In the year 2000, on the eve of the Sydney Olympic Games where Craig had been assigned to work as a broadcaster, he experienced a psychotic episode and was diagnosed with Bipolar Disorder.

He spent 12 days in hospital and, since his recovery, has become one of Australia’s most high profile speakers on Mental Health and Well-being.

In July 2012, Allen and Unwin released his second book “A Better Life”

Craig Hamilton is now an internationally sought after motivational speaker who tells what it’s like to battle serious mental illness.

His inspiring story offers hope and motivation to others. 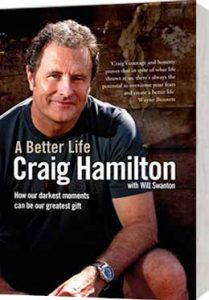 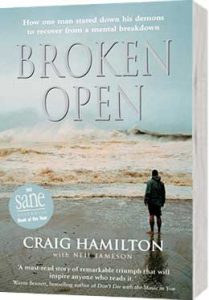 As a Beyond Blue Ambassador, Craig provides an insight into what it is like to experience a mental health condition and gives hope and encouragement to others.

“Because Craig deals with his illness openly and publicly, we asked him to become an Ambassador for Beyond Blue 10 years ago. Craig travels the country speaking at public meetings and to the media, helping to raise awareness of depression. By speaking out, Craig is helping others, particularly in encouraging them to seek help.”
The Hon. Jeff Kennett AC, Beyond Blue

Craig was a real gift to us yesterday. What a great and powerful speaker. He was wonderful, fantastic, educative, funny, I can't say enough. I have had a huge response from people, lots of emails expressing their gratitude at hearing his story. He spoke from his heart and the audience was riveted.

Craig spoke to our workforce of over 350 people over five sessions as part of our commitment to mental health awareness and support, and the feedback from our people has been exceptional. Craig's experience with mental illness provides a compelling story, and his willingness to share his experiences and advice has helped raise awareness and discussion on the subject by our employees, the majority of them men. Employees are now coming forward and speaking about their own experiences, or those of families and friends. We can't commend Craig highly enough for his honesty and insight into confronting, understanding and managing this illness and its complexities.