There has been a great deal of focus lately about the impact social media usage has on our mental health.

In my view, social media is a wonderful way to stay in touch with friends, meet new people, promote your business and focus on the things that you’re passionate about.

I use social media but I’m very conscious about how much time daily I devote to the online world.

Does social media have a negative impact on our mental health?

In my view in many cases, absolutely.

In recent times Facebook’s founding President Sean Parker has commented that he knew they were creating something addictive that exploited “a vulnerability in human psychology.”

Parker described how in the early days of Facebook people would tell him that they weren’t on social media because they valued their real-life interactions.

And he would reply “OK. You know, you will be.”

He went on to explain that when Facebook was being developed the objective was: “How do we consume as much of your time and conscious attention as possible?”

It was this mindset that led to the creation of features such as the “like” button that would give users “a little dopamine hit”.

In my view, this is the crux of the problem

Dopamine is the naturally produced “feel good chemical“ that makes us feel great and a regular “hit” of dopamine can be highly addictive.

For all the positives that the use of social media provides the downside is the lack of attention we might pay to other areas of our lives and this need to get a “hit” of dopamine on a regular basis.

Facebook obviously isn’t in the same league as cocaine, speed or other illicit drugs which give you a high, but it can still provide a little “high” every day.

Social media can also validate someone’s view of themselves and raise self-esteem which for many kids who struggle socially can be very helpful in developing relationships.

The opposite can be true for the sensitive and vulnerable teenager who receives negative messages on social media.

There has been an increasing number of teenagers whose mental health has been negatively affected by online bullying.

The worst case scenario has been suicide.

Many parents are extremely concerned about their kid’s usage of social media and quite rightly so.

There is no quick fix to online bullying, but in my view, the short answer is to report it and block the perpetrator straight away.

Someone who bullies you has no place in your life.

Then find other ways to build self-confidence besides social media.

Learning self-defence is a great place to start. Not just so you can physically handle yourself but it really is a great way to raise self-esteem.

There are other downsides of excessive social media use.

I find it staggering when I see a group of friends get together. I’m not just talking about the 12 to 18 years of age here, I’m also talking about many people in their 40’s and 50’s. There can be 4 or 5 friends sitting around a table having coffee and EVERYONE of them is on an iPhone and not talking to one another.

Talking to each other is good for our overall mental health aside from the obvious benefits of maintaining our language skills.

So have a good think about it today. Do you overuse social media? 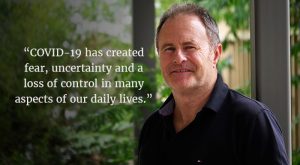 COVID-19 and its impact on our Mental Health